There is a more clinical look about Arsenal this season. In the last three games the Gunners have scored 11 goals (FC Twente, Newcastle and now Blackburn).

After a indifferent start to the season the strikers are starting to show their true colours, Adebayor this week finally scoring his first goals of the season. The movement was superb from the front men, pulling the defenders left and right opening gaps for the players to exploit. Adebayor is usually the one who plays higher up the field while Van Persie drops deeper to link up the play. For the first goal the roles were reversed and by dropping deep created the space for Walcott to run into and he fed Van Persie to poke home. By dropping deep Adebayor dragged Samba to the left creating an uncertainty in defence.

The second goal was similar as this time Van Persie dropped deep to drag Samba out allowing Denilson to run into the space behind him and crossing home for Adebayor to head. It was textbook movement and the attack was classic Arsenal as the passing building up to the goal went to the whole length of the pitch and back. It was the ultimate test of concentration and positioning which Blackburn failed all game. 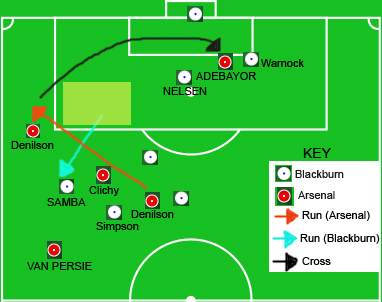 The yellow box is where Samba was occupied however he was dragged out by Van Persie, playing the ball to Denilson who had know the space left by Samba to cross for Adebayor’s first of his hat-trick.

Blackburn: Victim of their own undoing

The Rovers defence tried to play the offside trap throughout the match but it backfired as Arsenal took advantage. They were offside 7 times altogether but still exploited the plan further by scoring four goals. Playing Andrews ahead of tough tackling Mokoena was a gamble as he was playing in League One just last year and after a shaky start started to get into the game however his inexperience showed in the second half as Arsenal ran riot.

They tried to play at Arsenal’s weaknesses in defence which was the high ball. The Gunners dealt well in what could have been worse. Santa Cruz caused problems in the first half but the quality in midfield was not good enough as Rovers missed David Dunn though a surprise was the non-inclusion of Villanueva who stayed on the bench.

Cesc Fabregas and Denilson partnership continued and the return of the Spaniard has coincided with the recent good form of Arsenal. It is not a secret that he is integral to the Gunners so fans are hoping he and other options in midfield stay injury free. Fabregas made the most passes (95) more than Reid and Andrews put together. Another curious stat is that the Arsenal pair also made more tackles (15) and with a higher degree of success (73.3%) than Blackburn (Vital Arsenal stats). It looks like the partnership is ever improving but it will be interesting once the real test has begun in the form of a top four side. Overall it was a poor Blackburn central midfield where the oppositon must dominate if they are to beat Arsenal.