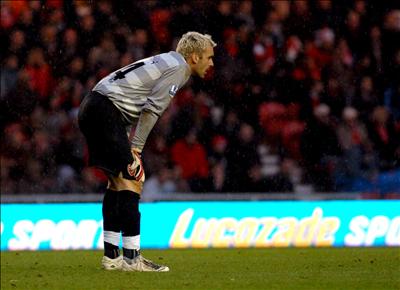 Manuel Almunia has been recently criticised by some Arsenal fans and after his penalty save against Aston Villa but the failure to save Agbonlahor’s shot for the second goal, the knives were back out looking for someone to blame.

Almunia weren’t the only one blamed; no Arsenal player seemed to escape criticism but the Spanish (or English?) shotstopper has continuously had his critics since joining the club.

I’m not saying he is the best goalkeeper in the world but I still rate him as a top goalkeeper wheras some of his attributes are close to the best in the world. Goalkeepers are subjected to making more crucial errors than other positions; they have the unthankful task of stopping the other teams scoring and a lot of times those whoare in front of him don’t make life any easier. The goalkeepers’ role has increased and are expected of more from their abilities. It is not just about being big, tall, athletic and having good reflexes. Huerlho Gomes has just found that out and indeed many goalkeepers when coming to the Premiership are tested to the maximum of their abilities.

It is as much mentally as it is physically. Confidence, concentration, communication, anticipation, command of area, positioning are some examples of what attributes they require.

Almunia has improved greatly since he joined the club from Celta Vigo in 2004. When he first played he was a bit like Gomes, great reflexes especially when saving from penalties but committed suicide by making wrong decisions. Goalkeepers usually also peak later and in Almunia his best years are now. What we have is one of the fittest goalkeepers in the Premiership; his commanding of his area and anticipation, knowing when to come out is one the best, especially through balls and balls over the top denying a number of potential goalscoring opportunities. Coming for corners his is commanding and usually gets the ball (okay Stoke he should have done better but it was something he has never faced before and was very awkward) while his kicking is probably the best in the Premiership.

He isn’t perfect in these areas, the goals he let in against Tottenham and Stoke show this but after a near faultless season in 2007-2008 you could argue he was due. He has been a very consistent performer the past year and because Arsenal are under-achieving, made to be a scapegoat. Having played in goal for a year and a half (and to some surprising success till my injury) I realise greatly what it is needed to be a great goalkeeper.

Keepers require confidence to play at the top of their game (look at Robinson now) and it’s just a shame he is playing in a position where one is likely to make more crucial errors than any other position.

With all this talk of Arsenal needing a defensive midfielder Arsenal Column will try and identify any possible signings that the Gunners can make leading up to the January transfer window (doesn’t have to be a midfielder if actually we do require one). The first look is at Scott Parker of West Ham:

Tenacous, tireless and possesing great technique, Scott Parker had been destined for the top since breaking into the Charlton first team. After impressing he moved to Chelsea for £10million but was played out of position on the right and was sold to Newcastle where he faced a injury ravaged few seasons at St. James’ Park but was still named as captain. He moved to West Ham after they were taken over in 2007 but injury has once again limited his appearances.

With West Ham’s current problems he may be available at a snip at £5million. He has recently been their best player but has been substituted as the team fell behind maybe signalling he is not valued as highly enough by Zola. Injury is his main problem (and having also injured Theo Walcott in England duty) he is still a good player and could be the perfect foil for Cesc Fabregas (if indeed one is required).

One thought on “In Defence of Manuel Almunia”