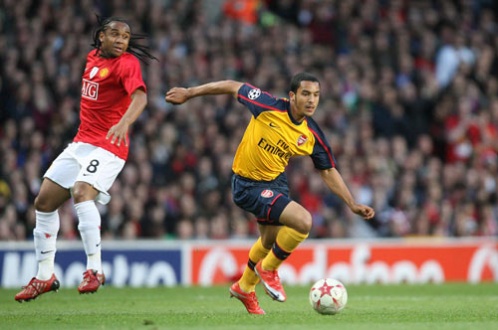 Arsenal Wenger has normally never played with traditional wingers. Overmars was probably the first and ultimately the last until Walcott came about. Pires and Ljungberg were both converted attacking midfielders while Hleb and Rosicky have always shown their creative roots. But even with their differences, all including Overmars, had more to them than just being able to run past defenders; all thought with their head rather than their feet.

“I like to have one behind the striker, and one or two on the flanks who come inside,” said Wenger. “I always feel that if you have players who can deliver the decisive ball in all areas of the pitch, you have many more chances of being creative. If it’s only focused on one central part, where it’s usually more concentrated, you have more space on the flanks to create.”

Arshavin and Nasri both fall into the category of ‘Wenger style’ wingers but with Walcott’s increasing integration to the starting line up perhaps there is a slight change of philosophy. Against Chelsea, the manager started with Van Persie on the left and Walcott on the right as he wanted to play with ‘wingers,’ as he put it but in the end were too orthodox. Only at the beginning when Van Persie interchanged with Diaby were Chelsea most threatened and incidentally when the goal came about. At Manchester United, the Red Devils packed the midfield, Rooney then forced Walcott back with United’s early attacking impetus and after the goal, vigorously closed down the winger.

Most of today’s game is about space; pressing to deny space and to make best advantage when you get the space. Former Ecuador manager Luis Fernando Suarez argues the physical development of the game and the packing of central midfield means that more emphasis should be placed on the wings. Around a quarter of goals  from open play come from a cross and teams are quick to stop that happening.

If that happens wingers are effectively phased out unless they have more in the locker to get themselves out. Hence the decrease of the natural winger; someone who will come back to the dressing room with chalk on their boots but will actually have one good game in five. Unpredictability is the key weapon in today’s game and it is better to have those that can maximise the spaces. Rinus Michels speaks of ‘operational space’ and that is where the big sides excel in (think Manchester United’s front four last season).

There are many good wide men but in an utilitarian game coaches prefer to have those players that can not only stick to the touchline but can come off the flanks to exploit the space that is potentially on offer.