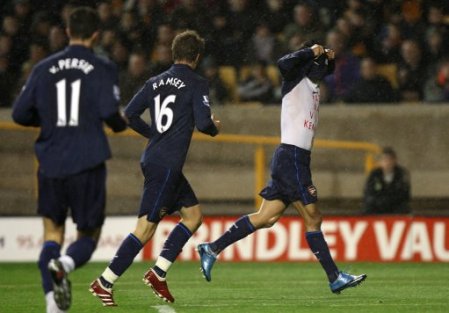 Alex Song gave a reminder of what is to be missed in January when he leaves for the African Cup of Nations as his introduction gave Arsenal renewed spark in the midfield.

Wolves hassled and harried the Gunners early on with their mix of direct football and high-intensity pressure but as Diaby departed under the Molineux lights through injury, Song’s entry brought a little sanity to proceedings. That’s not to say Diaby would not have settled because it was Wolves right as the home team to make Arsenal earn their right to play. But Song has added a little sophistication and expertise to the role as typified by his nonchalant flick to Fabregas early in the second half while Diaby is still learning, nevertheless making two interceptions in twenty minutes and three tackles.

Two own goals – the first from Zubar, helping a Cesc Fabregas corner into the net before Jody Craddock inadvertently headed Eduardo’s chip over Wayne Hennesey – allowed Arsenal to regain their composure and from the first kick in the second half, utterly dominated proceedings. Their superior technique took over as Fabregas finished a flowing move to make it three and Arshavin extended the lead with a opportunist half volley from the edge of the area following Hennessey’s punch out.

The Gunners obsession with keeping the ball has translated to being more efficient and direct. By stretching the play, Wolves had more ground in which to cover allowing Arsenal to slowly stamp their authority. It also meant the side could create more angles in the pass and zones for men to run into causing unpredictability. Cesc Fabregas was once again the master of time and space as he made full use of the pitch to manufacture openings. Aaron Ramsey also made a notable contribution with a high energy performance although his passing ranged from the superb to the erratic, still missing the decisiveness that experience will bring. But once again it was a strong team performance that set Arsenal on their way. “I think the most important factor is that we play for each other as we do, we focus on our performance, and that we continue to develop our style of play,” said Wenger. “To play at a high pace, our collective game,”

The late goal conceded to Craddock from a corner kick would not have pleased Wenger but accepts their may be at times leaks in the system due to their offensive style. “We have a style where everyone goes forward,” he said after all his defenders had more than forty passes each. “You cannot have everything in football, but I believe we have a good balance between offense and defence, and as long as we score as many goals as we do, we can accept that.”