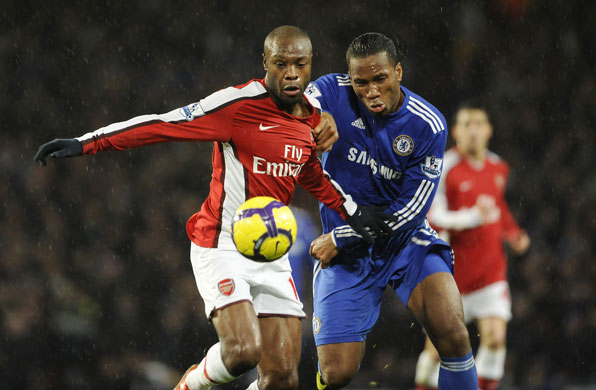 It was an evening where Arsenal ran out of ideas but not without the want of trying. The Chelsea players were tactically and mentally more stronger, though not physically as some may have seen it.

Taking the lead with two quick goals at the end of the first half – both created by Ashley Cole and converted and diverted in by Drogba and Vermaelen respectively – they were able rest on their advantage and see the game home. Didier Drogba wrapped things up with a free-kick with four minutes to go but the game was already over. The spongy Blues defence assimilated every thing Arsenal tamely threw at them in the second half and in all reality, have surely ended the Gunners title dream.

Arsene Wenger remained defiant on that subject and rightly stated that the team has “to make sure that lack of belief does not diminish our belief.” Arsenal had the greater territorial advantage and displayed in spells in this game and indeed the season so far, the makings of a super team but one senses, with the way they play their football, more work will be needed than normal.

Chelsea were thoroughly efficient. They didn’t need the ball to dominate play but do so with their methodical thinking. Carlo Ancelotti conceded possession to the Gunners and looked to defeat them on transitions. The aim was to deny Arsenal space through his customary diamond midfield although surprisingly opting for Mikel over Ballack in the starting line-up. When the ball was won back, he sought to make sure they have the necessary men forward to arm their offensive side through channels and quick breaks. Ashely Cole duly obliged, creating two goals through two rare but selective forays forward, Drogba scored two and Anelka was a willing runner all night. It would be too simplistic to say it was as easy as that because the defensive collective combined to superbly deal with the pressure Arsenal forced upon them.

“We wanted to use intelligence to defend our half and there we won the game,” said Ancelotti. “Arsenal put a lot of players in midfield and sometimes they lost the balance. We knew that Arsenal like to play in the opponents half and we prepared very well our defensive positions, keep control of zones. Arsenal kept the ball well in the first half but we always had the possibility to score on the counter-attack. We stopped them in midfield. There we won the game.”

Eduardo’s disallowed goal could have sparked a fight back but as Chelsea naturally dropped back in the second half and Arsenal pressed, it would be more apt to analyse the first period. The Croatian had a difficult game once again; he was superbly marshaled by the Chelsea back four and maybe his more orthodox nature played in Chelsea’s hand. The midfield battle was congested and as such the advantage was to be relayed to who so ever was the more direct and dynamic down the channels. Wenger made that switch in the second half, bringing on Walcott for Alex Song to give Arsenal that but found a resolute blue blockade in front of them at all times.

The Gunners success this season has been laid on by the movement of Robin van Persie and if a similar tactic could have been implemented in his absence, then it would have seen Arsenal match the Blues in midfield and create space for the wingers to get into attacking positions. The presence and strength of Bendtner and Diaby were other misses while one may have argued if it should have been Denilson that made way rather than Song to retain some power. As it was Chelsea were the deserved winners, their movement more efficient and decisive.

Pep Guardiola learnt a huge lesson last year against Chelsea in the Champions League, although the context is stark and changed his thinking slightly to make sure that ceases to happen again next season (the signing of Ibrahimovic changed the team’s dynamics). And at the Emirates, Arsenal were taught a footballing lesson where one would hope come out of the game stronger.