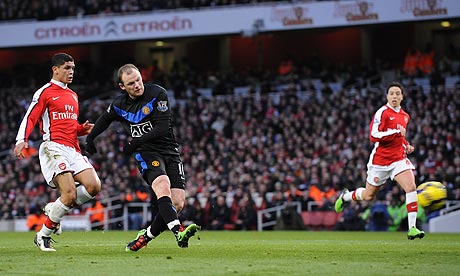 It was time again for Sir Alex Ferguson to get re-acquainted with the back of his hand. The wily Scotsman has enough big match experience – and success – against contemporary Arsenal to comfortably make it his chosen specialist subject on Mastermind as his side went about dismantling Arsenal’s title bid and reaffirming their’s. Manchester United met thrust with counter-thrust and vice versa but where much more ruthless from the latter.

There was little to separate the teams with half an hour on the clock as both teams found it troubling to break down each other’s defence from open play. United opting to play without Ryan Giggs missed a bit of invention in the final third and as a result Arsenal sucked up their attacks and looked to punish them on the break – Andrey Arshavin going closest with a drive wide of Edwin Van der Sar. But Arsenal have been slow starters this season, having scored only once before fifteen minutes in the league and once they started getting into their groove, Manchester United sensed their moment pounce. Luis Nani’s wonderful trick and run forced the ever-growing culpable Manuel Almunia to claw into his own net (although in fairness the cross looked to be headed for Park at the back post).

However, it was two devastating moments on the break that settled the tie. William Gallas was crowded out in the United box following a corner and as the ball fell to Wayne Rooney, the England striker, starting the counter-attack ended it with a finish of real conviction after running close to the full length of the pitch. Rooney then showed Arsenal the movement they tried to create with Arshavin as the false nine, as the forward took three defenders out by dropping short and the rest was rudimentary for Park.  There were only two options for Gael Clichy  – gamble and close down the attacker but risk the early pass or delay and hope the angle narrowed. As it turned out, Clichy left it two late for the latter and Park poked the ball past Almunia (could the ‘keeper have been more committed?). Counter-attacking is not merely a policy for Manchester United but a deadly and utterly ruthless weapon in their armoury. “Counterattacking has always been part of our game, particularly away from home, and we capitalised on those opportunities,” said Sir Alex Ferguson. “Arsenal play a lot of good football and get to the edge of your box regularly, but if you can win the ball there and counterattack quickly you’ll have chances against them.”

“Transitions have become crucial,” says Jose Mourinho, who always seeks to keep his side organised with five at the back in guard of such moments. “When the opponent is organised defensively, it is very difficult to score. The moment the opponent loses the ball can be the time to exploit the opportunity of someone being out of position.” That was the situation that was also posed to Arsenal; the Gunners’ expansive style meaning more resources are committed forward and therefore less organisation at the back. And those gaps are even bigger this season due to the play being stretched on account of the switch to 4-3-3 and cover for the full-backs minimal. Sir Alex would have targeted the right-hand before hand with or without Valencia and deployed a ‘defensive’ winger on the other side. The slight surprise was in deploying Carrick as the deep-lying playmaker as the manager decided to sacrifice a bit of energy for extra tactical nous lower down, while Scholes’ creativity was to be translated higher up the pitch.

Arsenal in contrast were unlikely to play any differently. Arsene Wenger went into the game wanting to control proceedings but found in front of him a sea of black shirts who were very committed in not opening the floodgates and letting Arsenal have the initiative. Dynamism on one hand has waned since their electric start to the season and the late flurry could not hide the defects. The best Wenger can hope his side can regroup and find that extra spark again.

So where next for Arsenal? Chelsea at Stamford Bridge…