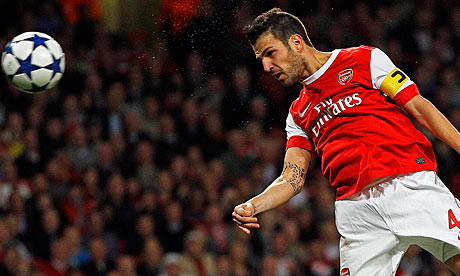 On the face of it this was another quintessential Arsenal victory against Sporting Braga but this 6-0 demolishing of the Champions League débutantes was built on clinical attacking play and a solid defensive foundation. Arsenal didn’t allow the ball to get anywhere near Manuel Almunia and that to some, was a victory in itself. Question marks will be raised at the integrity of Braga and certainly they were found out to be the novices they actually are; freshmen given a pummeling on their first day but on such scintillating form, many of European football’s finest would have had trouble facing Arsenal on such form at the Emirates. The Gunners were quick, incisive, accurate and obdurate and all inspired by the talismanic Cesc Fabregas.

Arsenal fans were ecstatic after this summer’s longest running transfer went their way as they managed to hold onto their captain. Still only 23, he is the complete central midfielder combining eye of the needle assists with lung-power, awareness and now goals. Fabregas was imperious here against Sporting Braga, his selfless team play exemplified as he passed up the opportunity to secure his hat-trick by playing in Carlos Vela for Arsenal’s six. His pre-match interview was the object of determination and seriousness as he chastised his team-mates for losing their concentration for a period of ten minutes at 3-0. If this is to be Fabregas’ last season in red and white, it will damn well be a good one seemed his apparent message.

Arsenal’s passing too quick for Braga

On the pitch, it was Arsenal’s rapid interchange that tore Braga apart. Their opponent’s game plan was simple – defend with nine at the back and break quickly. Except they couldn’t and what followed was that they allowed too big a gap between midfield and defence – and this was with the two ubiquitous holding midfielders in front of their back four. “Against teams that are going to sit back and let you have the ball you’ve got to move it quickly and get them moving around,” said Arsenal reserve coach Neil Banfield and indeed, the level of ambiguity confused Braga’s marking. Marouanne Chamakh revelled in the roaming  striker role and the advantage of playing the “false nine” style striker is that their movement forces back lines to push up. Bolton found that out in the 4-1 defeat in the weekend and here Arsenal were constantly able to get behind in the channels. There is also a left-sided slant of play with Wilshere passing from deep, Chamakh drifting to the left and Fabregas linking with Arshavin and the Moroccan that it was no coincidence most of the goals came from that side or as a result of change of emphasis of one side to the other.

The starting position of Alex Song and most particularly Jack Wilshere, who had a wonderful game, meant Braga’s two central midfielders were posed with a dilemma. Get tight and run the risk of allowing Arsenal space in between or drop deep and get shunted around by Arsenal passing speed. As a result, they could do neither and with Cesc Fabregas playing a “free role”, the Spaniard was too difficult to pick up. The formation, an inverted 4-3-3 in the centre whereby there would normally be two central midfielders either side of the deepest midfield now resembles more a 4-2-1-3 with Fabregas playing the highest. The reason why you would be hesitant to call it other than a 4-3-3 because Fabregas is not exactly playing in “between-the-lines” as a playmaker would in a 4-2-3-1. He has a vaguely defined role of dropping back to help the central two but first help the forward press the defenders. So in a sense, it becomes difficult for opponents at different stages of the match to define whether he is a midfielder or a striker. Blackburn marked him well in the 2-1 defeat to the Gunners at Ewood Park as first Vince Grella marked Fabregas if he dropped deep and Phil Jones did likewise higher up the pitch. At the Emirates, he was everywhere and Braga could find no answer.

Defensively, Arsenal were also very comfortable. Laurent Koscielny and Sebastien Squillaci’s tight marking style means it was difficult for the Portguese side to counter attack and it helped of course that Wenger’s instructions were to drop deeper and counter that threat on the break. It looked like a routine victory at times with the way Arsenal soaked up Braga’s feeble attacks but the quality on show bordered on footballing Nirvana. A style that should make the whole of Europe stand up and notice. “We won the game but I believe as well we played the game we wanted to play, at a high pace, with top technical quality and with a lot of creative attitude and a good concentration and collective spirit,” gleamed Arsene Wenger. “Our game is based on that. 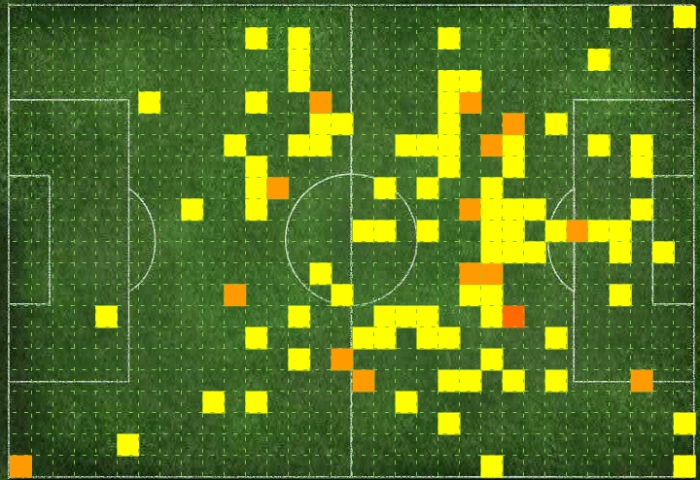 <Figure 1> Fabregas played much higher against Braga, wreaking havoc in front of the box and got his reward by scoring two goals and finding openings in the opponents defence. Image courtesy of ESPN Soccernet. 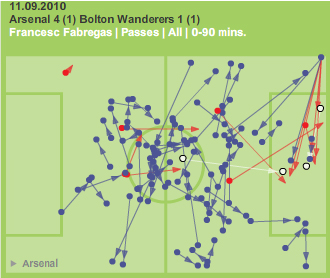 <Figure 2> Arsenal’s tight midfield positioning is displayed here by the pass position of Cesc Fabregas. Playing more closer to Song and Wilshere, partly because of Bolton’s stubbornness around the box, he was able to pick up the ball from deep and then break forward to make three assists. Image courtesy of Guardian Chalkboards.