Arséne Wenger’s men are often too ready to accept their role as beautiful martyrs, highlighting the negativity of their opponents and bad refereeing as causes of their downfall. At Camp Nou, they may have been right to aggrieve the latter, never the former, although in football, much is about managing luck and that Arsenal escaped two penalty decisions has seemingly not registered with their arguments. Perhaps there is a saneness to that action because a penalty at 0-0 and subsequently at 1-0 when Pedro was brought down, wouldn’t have “killed the game” as Wenger exclaimed. When the harsh red-card was given, it certainly deprived the encounter of its competitive edge.

Arsenal was seemingly back in the game after Sergio Busquets headed into his own net following a painfully one-sided first-half which ended with a delightful Lionel Messi goal. And once Robin van Persie was played behind on 55 minutes, there was a feeling Barcelona had lost some of its sharpness; the constant probing and rummaging of Arsenal from left to right in the first period and asphyxiating hard press beginning to take its toll. But the Dutchman was flagged for an offside and then inexplicably called back for a second yellow for taking a shot. One second had elapsed since van Persie took his first touch and shot wide but that was enough for Massimo Busacca to deem it as time wasting. To be fair to the Swiss referee, he had already made clear of his no-nonsense attitude after booking Bakary Sagna for throwing the ball away but he similarly overlooked the Darth Vader Death Grip performed by both Eric Abidal and Adriano a few minutes earlier. And what of the referees role in the modern game? Shouldn’t it be, not just to uphold the spirit of the game but with so much at stake and the mass televisation of football, encouraged to let the game be played as competitively as reasonably possible? Howard Webb was derided by the mass audience for not showing more leniency and understanding to the significance of the event in World Cup Final of 2010 and Busacca should similarly be examined for a soft red-card.

However, to fixate on the red-card alone is perhaps missing the point because before then this was utter superiority in its purest form. Sure, the tie may have taken a different course but as the Madrid based newspaper, AS wrote, “Arsenal, despite Wenger’s complaints, didn’t have a shot at [Víctor] Valdés once. And even so, they were just a step away from making the quarter-finals.”

Here, Barcelona seemingly wiped away any notion of Arsenal’s identity. The rapid passing, the quick interchange of players, the dynamic speed in which it can create an attack was non-existent. Passes never found a sequence; it was as if Arsenal was passing to prime numbers. This was because not only did Barcelona monopolise the ball, they owned space and viciously hounded The Gunners off the ball whenever it had possession. They completed 24 interceptions, the majority in the final third of the pitch and you could say the Cesc Fábregas error was forced by their intense pressing of the opponent. Arsenal couldn’t get out of its own half and the final statistic, 20 shots to 0 tells it’s own story of Barcelona’s domination. In Lionel Messi, Barcelona has the man that can make the difference and more often than not, he does. His goal was sumptuously taken, flicking the ball over Manuel Almunia before shooting in an empty net. And around that, he was at the heart of every dangerous move from Barcelona although there must also be credit given to Xavi, who finished the second after a great move and Andres Iniesta for his assists for the two goals.

Arsenal tried to reproduce its gameplan from the first-leg by pressing up the pitch and conceding the wings so it didn’t lose its compactness. Abou Diaby came in for Alex Song and produced a competent display; his presence also helping to smother Messi early on. However the first two selectional mistakes Wenger made was to bring in Tomas Rosicky for the injured Theo Walcott and despite their obvious qualities, two players clearly lacking in match sharpness in van Persie and Fábregas. The pair may have been passed fit but that in itself should not have been used to make the decision on whether to start the two. Fitness tests doesn’t necessarily give a great indication on the intensity they would have to exert and it was evident that both men were behind the rest after twenty minutes. Their lack of fitness gave no intensity to the press high up the pitch and that forced Arsenal to defend ever more deeper. But Arsenal didn’t park the bus, it was just unable to get out of its own half. Much to do with Barcelona’s pressing but the lagging intensity levels of the front men and the inability to break past the press, did it for The Gunners. “They attack less. Maybe they play to keep the result,” Barcelona coach Pep Guardiola said. “The reality is that they were not able to string together three consecutive passes and they were not able to shoot once on goal.” 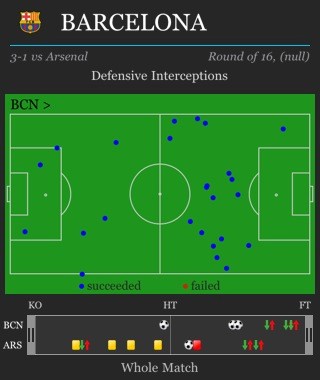 Bringing in Rosicky also showed Wenger’s fixation on keeping Barcelona quiet when the presence of Andrei Arshavin or Nicklas Bendtner may have allowed Arsenal of an out-ball. There was no speed in the transition and evidently, Arsenal relied much on Samir Nasri on the break because Rosicky and Fabregas were unable to help get support to van Persie. It all seems quite harsh on the manager to point out selection discrepancies, especially with such a big decision going against them and the sheer quality of Barcelona but the team defended well and that for one deserves some credit even if it seems inferior to say that.

In Spain they believe Barcelona is the best team in 30 years or so and it is hard not to agree with that assertion. The quality of its own league hinders it acknowledgement as the worlds best, especially with Real Madrid also dismantling La Liga opponents with relative ease yet no one does it in the style Barcelona does. There is an argument the team is too dependent on Lionel Messi and in this game, perhaps that showed but the Real Madrid side of the 1950/60’s were heavily influenced by the genius of Alfredo Di Stéfano yet that does not stop them from being so revered. There is another assertion that, through all their technical brilliance, they play one pass too many but again that is merely clutching at straws and and acknowledged of how good they can still be. Nevertheless, it should be up to the opponents to a) stop the amount of passes played by Barcelona and b) have a respectable amount of its own. That defending to keep a clean sheet for the whole game is seen as a achievement further underlines Barcelona’s greatness and one still waits for the day where a team can compete with them for possession. That Arsenal did try to fight fire with fire and succeeded with a win at The Emirates saw this blog exclaim the game as the best of the modern era because no one else has come close using tactics which can be considered as “proactive.”

AS put Arsenal’s struggles in the 3-1 defeat in the context of just how superior Barcelona is to the rest of the football stratosphere. “Arsenal yesterday spent 90 minutes pursuing what is their hallmark in the [British] Isles. But there, there is no Barça.” Arsenal has Manchester United next. The best team in England. But, in their own right, a long way away from being Barcelona.