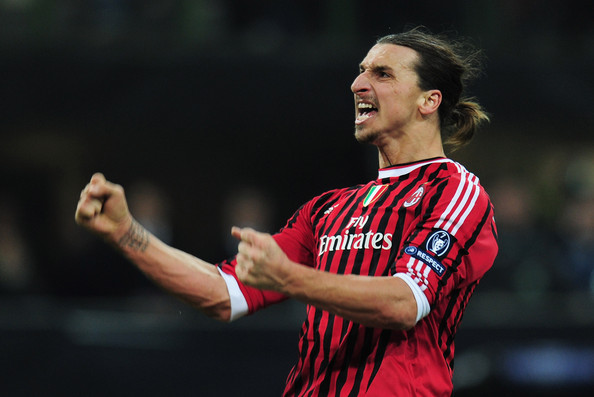 If there was a football equivalent of a “perfect game” then AC Milan might have executed it. Unlike baseball though, it’d be qualitative because Milan didn’t overwhelmingly dominate in any of the main statistics – except shots – but their game-plan went  perfectly according to plan to emphatically defeat Arsenal 4-0 in the 1st leg of the Champions League knock-out stage. It doesn’t happen often; FK Crvena zvezda (Red Star) might have claimed to have done that when they beat Liverpool 2-1 in the European Cup in 1973, imploring even the Anfield crown to applaud their winner. Or Ajax in 1966 as they defeated the same club 5-1, forcing Bill Shankly to peculiarly declare that “they were the most defensive team we have ever met” – everything just went right for Ajax. Milan’s 4-0 win over Barcelona in the 1994 final may have been as perfect as it got in the European Cup while you can argue Barcelona themselves do it every week (except very recently), winning by doing EXACTLY what it wants.

There is a feeling, though, that Milan played a perfect game because Arsenal’s inefficiencies make that more likely to happen against them.

For all of Arsenal’s progress this season after a summer of discontent, there are still teething issues throughout the squad. Arsène Wenger admitted before the game that this Arsenal team had more “mental quality” than technical quality in comparison to the 2008 side which conquered at the San Siro, noting that that side were “technically perfect.” However, last night they well and truly suffered on both departments. Arsenal had a game-plan – to play in the opponent’s half (“at the start we will try to get out of our own half and try to get up there and play. Spurs won the game when they were dominated, but that is football today”) and in training the players were given instructions on what they might face and must do against the red-and-black. The reality was much starker as on the pitch, Arsenal didn’t react to scenarios Milan threw at them. Patrick Vieira talked about Arsenal lacking “leadership” on the pitch and he’s right. As Gus Hiddink stresses, players must “coach” team-mates on the pitch and Arsenal don’t do that enough.

Much was made of the pitch beforehand and that may have had some influence on Arsène Wenger eschewing a wide game. He started Tomáš Rosický on the left instead of Alex Oxlade-Chamberlain, possibly to help cover the returning Kieran Gibbs but mainly to help retain possession better. In that, it wasn’t such a bad move because he was one of Arsenal’s most creative players and by working the ball wide, they might have shuffled around Milan’s supposedly narrow midfield. Milan, though, threw a spanner in the works and set-up much more dynamically than expected.

Massimiliano Allegri played a 4-3-2-1 shape, using the three forward players in a roaming capacity when in possession which overwhelmed Arsenal’s defence because when they attacked, it meant Arsenal’s centre-backs had an extra man to watch. They couldn’t mark man-for-man because they didn’t know who to pick up as Milan committed runners superbly. In midfield, they alleviated any numerical disadvantage, partly because of Arsenal’s shape, but also because they closed of any gaps with a midfield three which was backed up a vociferous three in front. “Our positioning was excellent and it prevented them from creating good openings,” said Allegri.

Arsenal partly played to their downfall as their shape was closer to  a 4-4-1-1 and especially when they pressed, only Aaron Ramsey and Robin van Persie did meaning it was very easy to bypass the men closing down and get into midfield. And when Milan did attack, they used all areas of the pitch, stretching it with a roaming front three and pushing the full-backs forward. Arsenal’s inefficiencies were exposed. 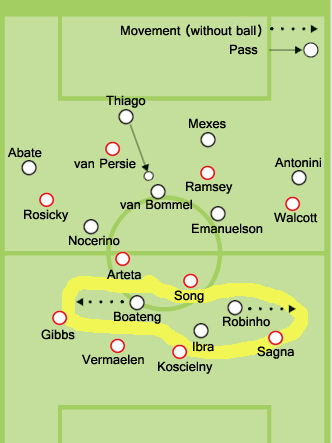 But Arsenal, famed for their exuberance in attack were improbably flat and suffered from a “poverty of ideas”; they could not get any telling support to Robin van Persie. At half-time, Wenger whipped off Walcott – not necessarily for his individual performance, because were bad all-round but because he characterised the team’s lack of ingenuity. Arsenal were able to work it into wide areas but most often just crossed the ball into the box. Wenger resorted, in the second-half, to looking to play through the two players that Arsenal have that can make something happen – van Persie and Thierry Henry – and now one of those is now gone. The narrow shape created one great chance which was saved brilliantly by Cristian Abbiati but the lack of technical ability in the side is galling. It’s just not Arsenal and Wenger knows it; his words before the game remained upbeat but were filled with underdog rhetoric. But, this is not a club in decline although the strategic direction since the move to the Emirates has hampered their competitiveness. The blow was delivered by Zlatan Ibrahimovic, the man who got away from them because Arsenal insisted a trial and The Gunners were unable to handle him as he created SIX chances. He was at the heart of all the Rossoneri’s attacking play. Tuttosport wrote this morning, that it had been a “magical night”. It was the perfect night for Milan.