Sokratis shepherded the ball, and man, out of play and let out a huge roar. This wasn’t to celebrate the end of the game, however – only 15 minutes had been played. Rather, it was to let everyone – his opponents, teammates and fans – know he was in for a battle.

Indeed, it was early in the game and Arsenal were already in a battle. Bournemouth had started strongly, and were causing The Gunners a number of problems due to the energy and speed they attacked with. Unai Emery was already aware of this threat and elected to use a 3-4-3 formation because he knew Bournemouth like to play with two strikers. Sokratis started in the middle of the back three, and he, along with his partners, relished the challenge the opponents posed. “We had to play against a very good team today,” said Shkodran Mustafi. “In their last game they played brilliantly, especially when I watched the first half of that game against Manchester United. We expected a good, organised team who knows how to get forward when they win the ball. It was a tough match but you have to give credit to every single player on the pitch for us to be able to win the duels and go for it.”

Once Arsenal adjusted to the threat, however, they were the better team. Indeed, a lot has been made of the fact that Arsenal have not taken a half-time lead under Emery in the league, and though this was the case again when Joshua King equalised with the last kick of the half, The Gunners edged the game from 20-75minutes.

Thought Arsenal were pretty good between minutes 20-75. Bournemouth are really difficult to play against, especially away.

In the early periods, Bournemouth were quicker off the blocks. It wasn’t just the two strikers, King and Callum Wilson, that were causing Arsenal problems, but the two wide players who came off the flanks and supported them up front. As such, the Arsenal backline was initially overwhelmed. Bournemouth scored an offside goal from such an attack, when David Brooks thought he stroked in, and when they equalised (at that point, against the run of play), all four of the forward players were involved. “Joshua King did well physically today and added a different dimension to the front line, working well with Callum Wilson,” said Eddie Howe. “I was very impressed, they were a threat in the opening period. They pinned the centre-backs back and gave them a problem in behind.” And he added: “The goal was great from my perspective, defending deep and transitioning into a clinical finish at the end of a counter attack, so it’s a shame for them we didn’t get anything from the match.”

With the change in formation, it was always likely that Arsenal would need a period of adjustment, although, they would have preferred it if it was less uncomfortable than it was. On the one hand, they needed to figure out the best way to deal with Bournemouth’s many-pronged attack, and on the other, to get to grips with how to build out from the back properly. Once The Gunners settled, they dominated. (Such that Howe switch Bournemouth’s system to a 3-4-3 as well to try and match Arsenal).

This was Arsenal’s best match in the league for passes attempted in the attacking third (33%). In particular, Alex Iwobi and Henrikh Mhkitaryan were key in getting Arsenal from back to front. From their inside forward positions, they were always on the half-turn, always acting as the outlet for the deeper players to aim for so they can face the goal. When Arsenal got their goals, it was notable then, that it was Iwobi who was the impetus, first receiving the ball from Lucas Torreira then feeding Sead Kolasinac to force the own goal; and then later, getting the ball from Xhaka and this time playing a superb pass around the corner for the same full-back. On both occasions, it is the position he receives the ball which is important, simultaneously seemingly surrounded and not, the fabled position in between-the-lines.

When Antonio Conte first popularised the 3-4-3 in the Premier League, the success was that it allowed players like Eden Hazard to play “a mixed role between the flank and the middle” – which is how Arsene Wenger described it when he used Alexis and Mesut Ozil in a similar role in his last two seasons. It was particularly effective because most teams used a 4-1-4-1 or 4-2-3-1 and the space, if they pressed, or dropped back, was often to the sides of the holding midfielder(s). Here, Iwobi constantly drifted to the space to left of Dan Gosling, whilst Mhkitaryan did similarly, away from Jefferson Lerma. You can imagine then, the disruption it causes to the opposition’s organisation if their aim, generally as it is for Bournemouth, to drop off, because if the wingers then react by getting narrow, it affords space down the flanks for the wing-backs to bomb forward, That’s what Arsenal did, and in the end, it was Kolasinac, who made the two assists.

Whilst Iwobi was more effective, there was a suggestion that Mhkitaryan had a wasteful game. Certainly it’s true that he turned the ball over 9 times through either being dispossessed or miscontrolling the ball – indeed, I argue that he doesn’t use his arms enough to protect the ball which leads him to squander possession easily – and he only hit the target with one of his 7 shots. Yet, as described before, he played his part in Arsenal’s gameplan.

If anything, there is a slight slant in Mhkitaryan’s role compared to Iwobi’s because he has more freedom to roam across the pitch. Of course, his primary areas of operation would be to the inside right position, but his positional instructions were seemingly less fixed, sometimes running behind Lerma into the no.10 position instead of dropping to the side of him. Indeed, that’s backed by his role in the defensive phase, because often you would often see him man-mark Lerma instead of going wide first to stop Charlie Daniels, the left-back. Emery’s comments after the game seem to indicate some sort of asymmetry too. He says that the decision to go with the 3-4-3 “was an opportunity for us to find our best performance, best system and best combinations. For example today there was Sead Kolasinac and Alex Iwobi which is a very interesting combination.” But he adds after, the nuance of Bellerin’s positioning, suggesting perhaps, that there is a different plan to the way Arsenal build up down the right. “Also when we are pushing with Hector Bellerin wide we need some players for balance.” Of course, the obvious explanation is that he is saying Arsenal tend to be more vulnerable when Bellerin pushes up but why is this the case more down the right than the left?

Looking at the 12 league games Arsenal have played this season, only three times have they attacked down the right more than the left. What Emery likes is the overload down one side, before the switch to the other. Arsenal have a left-side bias when building up mainly because Granit Xhaka plays there. But in previous matches, Emery has tended not to really play a fixed right-sided player, be it Ozil or Mhkitaryan himself. That player tends to step inside 5-10 yards more than the attacking midfielder on the other side to facilitate this overload. Indeed, there were a number of times in the Bournemouth game where Mhkitaryan would aggressively move inside, leaving the right side open. As it happened, that just made Arsenal stronger down the left side anyway, and actually, they conceded when they were too zealous, at the end of the first-half, attacking down Bellerin’s side. 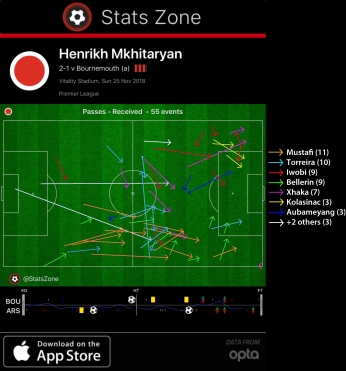 In any case, I highlighted on the pass charts of Iwobi and Mhkitaryan, who they received the ball from to help understand the differences in the build up. As you can see, Iwobi has more of a fixed inside-left position, and took most of his passes when combining with Kolasinac or between-the-lines from Xhaka. Mhkitaryan on the other hand, favoured drifting across at times, even picking up the ball from Iwobi. The passes he receives are also slightly different. From Torreira (10 passes), who is the midfield pivot most closest to him, they are more square, shorter even. However, when Iwobi receives the ball from the pivot on his side, Xhaka (14 passes), the passes are longer, more penetrative. As such, Mhkitaryan relied on Mustafi (11 times) to drive those passes to him to allow him to get on the turn. Iwobi only got the ball fom Holding three times; that might be because the angle Holding passes with – right footer always looking inside – means Iwobi is not really the viable option and rather, it’s Xhaka bursting into that space which is the go-to pass. Mustafi on the other side, is far more comfortable driving forward with the ball.

At the end of the game, Emery was forced to offer a final justification for his decision to select Mhkitaryan instead of Ozil. The answer he gave was that he knew the game would be “very demanding with the physicality and the intensity.” In fact, you probably have to look back to his quotes after the 1-1 draw with Wolves to get a wider tactical context. In that game, he had taken Ozil off at 1-0 down because he said he wanted to play with “two attacking midfielders. I decided that we had two players on the bench like Mkhitaryan and Aaron Ramsey, attacking players…so I made the change for this reason.” It suggests then his view on Ozil is that he’s probably not as dynamic as the other two, and perhaps even not as suited anymore to the wideish midfield role he used earlier this season. Against Bournemouth, Mhkitaryan showed great drive from his position, and probably should have scored with one of his chances. With 10 minutes to go Ramsey came on instead of Ozil, and he watched on as Arsenal held on to a win.