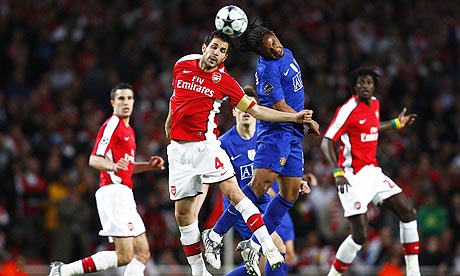 With that defeat, Arsenal’s 21 game unbeaten league run came to an emphatic halt. And perhaps fittingly, that run which started at Chelsea and ended against the same club, reveals how much the two clubs have come since then.

On the face of it, a great deal hasn’t changed from the Chelsea under Luis Felipe Scolari and the one currently managed by Guus Hiddink. However the Dutchman has made the Blues hard to beat again, instilling a more cautious and efficient approach to their play which in reality is just like the Chelsea of old. Against Arsenal they were counter-attacking, letting their opponents to do most of the running before hitting them with a sucker-punch. The return of Essien has been most important and the Ghanaian allows the team to be more dominant in the centre and control space better.

Scolari on the other hand wanted to make Chelsea the expansive, ball-hogging side that they were not suited to, especially without the injured pair Joe Cole and Deco. Tactically they fell short, as the Brazilian coach never look to deviate from the same style of football even when the game was being chased. Nevertheless even with these adjustments Hiddink has made, it is easy to see this side is running it’s course and look more likely to struggle than Arsenal next season if much of the team remains the same.

And indeed, Arsene Wenger has admitted signings are to be made next season, who more importantly are to be players of experience because the club is overflown with stars of the future. But for some, that reinforcement should have come before the start of the season when it was apparent in the previous campaign that a lack of depth was the reason for the derailment of Arsenal’s title charge. A lot then was placed on young Denilson’s shoulders to carry the fight after a slow start but while Arsenal were decent in attack, they were not great, even Fabregas’ return couldn’t bring back the flowing football.

Five defeats and the Brazilian was at the forefront of fans’ fury, some stating he was playing in Cesc Fabregas’s areas. The truth was, that the Spaniard was playing even higher up in order to repeat the previous season’s heroics thereby exposing the young(er) midfielder.  Pressuring was a team game but the stats actually showed Denilson was mostly (and quietly) leading the charge. The handing of the captain armband to Fabregas was part of the turning point; the playmaker became a bit more disciplined and started dictating proceedings all the while adding balance to the line-up. And with the club leaking goals, Wenegr urged the full backs to be more cautious.

“At one stage we had conceded too many goals, so we encouraged our defenders to be a bit more cautious,” said Wenger. The affect of the change has been fourfold: Early in the season (though not just limited to) Arsenal were being attacked in the space vacated by Clichy and Sagna (1) while at the same time putting too much strain on Denilson (2) and the centre backs (3), who had to push up to make up the space and contribute in creating the pressure in the other end. And they are also stopping crosses coming in to the box (4), long thought to be the defences Achilles heel.

A first half barrage at the hands of the Chelsea wingers and the Arsenal defence survived with only one goal conceded. The second half saw a Van Persie double inspire the Gunners to an important win but little did he know his role would become even more crucial in the coming months. Fabregas exited injured as Arsenal lost their main creative force. “When he’s there, everything goes through him but when he’s not it can take a while to adapt because the game goes through different ways – it’s plural,” said Wenger. “When it’s Fabregas it is more one-way traffic at the start of the build-up.”

Indeed it took a while and required some tinkering, no less helped by Arshavin’s arrival. Wenger responded to a barren run in front of goal by focusing the play on getting the ball wide and up the pitch quicker. The opponents were being pressured higher up the pitch due to assurances given by the cautious full backs and the midfield shield. Nasri moved to the centre in a 4-2-3-1 and mixing the above factors together, Arsenal produced their best senior performance of the season against Roma.

Fabregas’s return saw the skipper take up the Frenchman’s role but to mixed success; while Cesc was the more incisive passer, Nasri added better balance by supporting play better. Another good performance at home to Villarreal seemed to suggest the 4-4-1-1 to be Arsenal’s best system. However with the 2-1 FA Cup defeat to Chelsea, the hard work was becoming undone and the defensive shield proving irrelevant; good against the smaller clubs but against the bigger sides it meant it invited the opponents forward. Of course Arsenal were pressing higher up the pitch but if that failed (and a simple long ball could easily undo it) meant exposing the midfield cover.

Which invariably led to the Chelsea game. The high pressure exposed Song and the back four were left with too much to cope with in front of them. It required a bit more discipline from Fabregas or Nasri (at times it was difficult to fathom who was the deeper midfielder) who without that player operating as a number 10 were all too eager to move there. Arsenal produced their best attacking display without the finishing against the best defence in the league but the balance was wrong. “I believe we have quality defenders and it’s more a case of balancing the team defensively than the quality of our defender,” Wenger explained. “I still feel I was more worried in February when we were drawing 0-0 without creating a chance. It’s always easier to correct what doesn’t work defensively; if you don’t create chances you are always more worried.”

With players like Hleb, Rosicky and Eduardo last season Arsenal were able to share creative duties while the mobility and tireless work of Flamini was priceless. The Chelsea defeat, although large shows that while the attacking part of the game was less complete the defensive side, as a team required a bit more fine-tuning. Injuries have meant the constant changing of the line-up to find the right balance and with everything the team has learned over the season, can surely be displayed with a complete performance away to United on Saturday.